How to Throw an Oyster Roast

You can’t roast oysters without one piece of essential equipment: a pint of cold beer. Well that and oysters from the Carolina Meat & Fish Co. 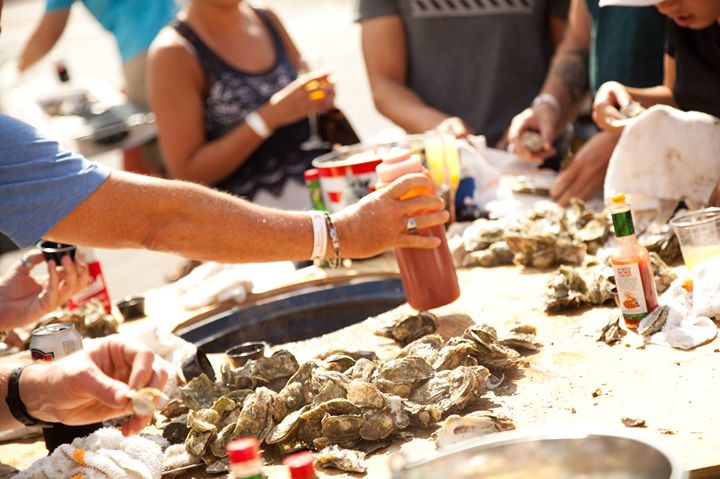 How to Throw an Oyster Roast

Oyster roasts are a culinary tradition in Charlotte, the South Carolina’s Low country and all over the Carolina’s. Before you start, you should have everything to have on hand to ensure a successful roast: a stack of firewood, four cinder blocks, a 4-by-6-foot sheet of steel, a shovel, burlap sacks soaking in water, a bushel of oysters, and, of course, plenty of good beer to drink.

And so, on a recent summer day, a few friends and I, each with a pint of Olde Mecklenburg Brewery beer and Carl had a nice Bird Song Brewery beer, we gathered under a large maple tree in my backyard. We scoped out a flat place in the grass. We stood the cinder blocks upright, creating a rectangle on which to lay the sheet of metal. Once the metal was laid on top of the bricks, I looked at it and thought, “Is it level?” So I poured some beer out of my pint glass onto the metal sheet. The golden ale pooled in the center. I declared: “It’s pretty darn level.”

When it comes to oyster roasts, we speak from experience. In Charlotte from October to March, we might get invited to an oyster roast a week for any occasion, including birthdays, sporting events and pre-wedding celebrations. A Thursday night oyster roast has become a traditional preamble to a Saturday wedding among Charleston couples. But roasting oysters dates much farther back, as I’ve come to  learn. Mounds of oyster shells dating to prehistoric times have been found on Edisto Island, south of Charleston as well as Topsail Island’s Stump Sound. The oyster roast is the one thing that ties together the pre-European settlers to the tourists. The thing we like to remind ourselves is: It really hasn’t changed at all for thousands of years. And really, not much has changed in the modern era. At most, all that is required is four cinder blocks and a sheet of metal. In my backyard, a fire is soon lit. Using a hose, I rinsed the mud off the oysters.

This separates a bad oyster roast from a good one.

Let’s see how hot our griddle is, spraying it with water. The droplets bounced and hissed as steam rose from the surface.

A shovel-full of oysters are laid out on the hot metal. The mollusks were covered with a wet burlap sack. Within five minutes, remove the burlap and shovel the first batch of steamed oysters onto a nearby table covered with newspaper. Soon all that could be heard was the popping of shells and the slurping of oysters.

Twelve dozen oysters later, I wrestled with a large oyster that refused to open. So I put the oyster back on the fire several times to see if it would open on its own. I’m not letting this oyster beat me.

Finally, the shell pops and I savored my last oyster: “It wasn’t the very best of the day but it still felt good to be the victor.”

Among the many lessons I learned this afternoon was this: Roasting oysters isn’t an exact science.

It may take several attempts to perfectly roast an oyster or to pry a stubborn one from its shell. Even an overdone or troublesome oyster can’t ruin a spring afternoon spent outside with friends under a maple tree with the smell of wood smoke all around and a pint of beer in your hand.

Oysters in North Carolina are in season starting in October and runs through the end of March. Your oysters at the Carolina Meat & Fish Co will be from the Stump Sound near Topsail Island, NC.  They are award winning, salty and delicious.

Unless you speak with someone, Friday orders ship the follwing week